A recent surgery in France

Born in the USA, it is nevertheless in Europe that percutaneous surgery has known an important soar in the 2000’s. It was introduced in Spain then in France by the surgeons from GRECMIP, who revealed it to the whole medical community so she could nowadays become an unavoidable technique for foot surgery.

As for the classical surgery, it consists in bone cuts (osteotomies) and surgical procedures on soft tissues. But the main difference resides in the fact that procedures are performed through the skin with minimal scars. Very thin scalpels (a few millimeters) are used for the soft tissues and motorized rotative burrs for the bone. The surgeon controls his gesture during the intervention thanks to a low dose intraoperative radiography, called fluoroscopy.
This technique is difficult to acquire and harsh learning and training are required with experienced surgeons. 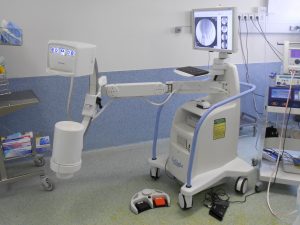 According to patients, this technique seems less aggressive for several reasons: the small size of the scars nearly invisible, its implementation in outpatient surgery under exclusively sensitive local anesthesia of the foot. However, it is associated with as many risks as conventional surgery, and even more in non-expert hands.

What gestures are feasible in percutaneous surgery?

The first step consists in reaming percutaneously the exostosis, with the motorized burr under control of fluoroscopy.

Then a percutaneous osteotomy of the 1st metatarsal’s neck (M1) is performed, preserving a bony continuity on the lateral aspect of M1, and according to a precise direction, to correct the orientation of M1 and the articular surface of its head. The adductor of the hallux is cut percutaneously for the lateral release of the metatarsophalangeal joint (MTP1). The next step is the percutaneous varisation osteotomy of the hallux’ 1st phalanx, to correct its axis. The last step isn’t strictly surgical but remains equally important: the bandage. He keeps the osteotomies in a good position, which is capital if no internal fixation hardware is implanted. However, the use of a screw provides the osteotomies with a much better solidity and can also be implanted percutaneously. Full weight-bearing is allowed, on the whole sole of the foot, with a rigid sole shoe.

Percutaneous surgery : the postoperative bandage and a silicone wedge maintain the corrections when no screw is implanted

Pain under the heads of lateral metatarsals are treated with percutaneous neck osteotomies so that the heads move back and upwards, which removes overload pain. The 2nd ray is more frequently concerned, because it is very little movable its base is enclaved in the mid-foot. Thus, strains transmitted to its head are high.
When a metatarsal osteotomy (M2, M3 and/or M4) is indicated, current recommendations preconize to associate systematically an osteotomy of the three metatarsal necks (2, 3 and 4), to respect forefoot anatomy. In case of non-respect of these recommendations, there a high risk of load transfer, that’s to say a pressure transfer from the cut metatarsal towards its neighbours, leading to pain under M3 and M4 heads.
The operative follow-ups are greatly simplified compared to conventional surgery and the open Weil osteotomy technique. 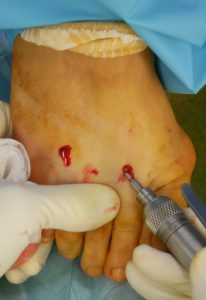 This surgery can be managed with several procedures eventually associated depending on the indication:

What are the dangers?

These techniques are well known to be difficult to achieve, though they look attractive. The danger comes from the use of aggressive tools and instruments without any visual control. The usual gesture of the orthopedic surgery is totally different. The surgeon must acquire it by following theoretic and practical courses such as practice on corpses.
With surgical solutions providing little scars, the patient’s requests must be analyzed. Surgery cannot be the answer of a purely esthetic demand. However surgical solutions, that is in first place an answer to pain or difficulties in footwear, can be made more esthetically acceptable
Finally, the surgeon must prevent from a “marketing” behaviour, a “sale” of a little-scar outpatient surgery, under local anesthesia. Percutaneous procedures are real surgical interventions with their risks and eventual heavy sequelae.