Mini invasive surgery is the result of the last 20 to 30 years’ evolution of forefoot surgical techniques. The universe of these techniques splits in two big kinds, which complement and oppose one to each other. Historically, the classical surgery called “open surgery” is the most ancient. The last born is the percutaneous surgery. Although modern in appearance, percutaneous surgery kept disadvantages, which led to a compromise : the mini invasive surgery.

Advantages and limits of percutaneous surgery

Is percutaneous surgery legitimate as the modern evolution of classical surgery since it reduces the scars’ size? Yes, because the procedure’s aggressiveness has decreased. In percutaneous surgery, the surgical outcomes are improved, swelling and pain decreased, and it’s more compatible with outpatient surgery. And last but not least, it seems psychologically better accepted. So the answer is yes, provided that no concession is made on the procedure’s quality.
Does percutaneous surgery enable to do everything ? The answer is no. Some deformations cannot be corrected only with percutaneous procedures. It is a mistake to yield to less aggressive but insufficient surgery.

Minimally invasive surgery is a way to perform to same corrections as in classical open surgery, but through very smaller incisions from 2 to 3 cm. Therefore the concept of a combined minimally invasive and percutaneous surgery comes naturally. A recent evolution of ideas is interesting among the “extremists” of the opposite sides. On the one hand the promoters of open surgery in France are faithful to their technique but start to include a part of minimally invasive or percutaneous in their procedures. They reduce the size of the incisons, perform percutaneous tenotomies, lighten the fixation with 1 screw instead of 2…

On the other hand, “only percutaneous” surgeons begin to add fixation, and are forced to classical metatarsal osteotomies, especially when deformations are too important.

Thus, we can see the balance positioning at a middle point, the mini-invasive surgery.

Sum up of the indications

However, thanks to technical devices these open procedures can be realized with smaller incisions and with less extensive bone cuts, but mechanically equally solid : this is the minimally invasive surgery. 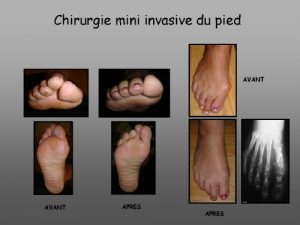 This case illustrates a case of minimally invasive surgery, in a 50 years-old patient consulting for hallux valgus with a severe deformation (metatarsus varus over 16°) and intense metatarsalgia under M2 head. These symptoms come with a hyperkeratosis zone under M2 and a 2nd claw toe. The relative length of the metatarsals is normal.

A first metatarsal open osteotomy (scarf type) is performed. It combined a correction of the metatarsus varus and a lowering effect to charge M1 head and reduce M2 hyper-pressure. Two osteosynthesis screws were needed.

All other steps of correction are performed with percutaneous surgery: 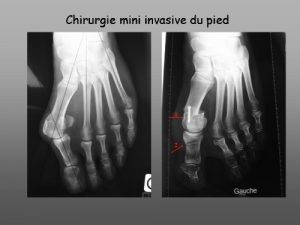 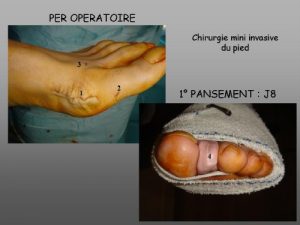 50 years-old patient, diabetic needing insulin.
Minimally invasive surgery on the 1st metatarsal, with chevron osteotomy. Everything else is performed with percutaneous surgery: varus osteotomy of the hallux phalanx and section of the adductor tendon. (Note that the bone section of the 1st phalanx hasn’t been fixed by a screw, it is hold by a silicone wedge made 8 days after the operation, to be kept 21 days. In this case, it was decided no to implant a foreign body in this diabetic patient to minimise infection risk.