Hallux valgus is a forefoot deformation concerning the big toe (called hallux). It is deviated laterally towards the other toes and a “bump” appears on the medial side of the foot. It is commonly called “bunion”. 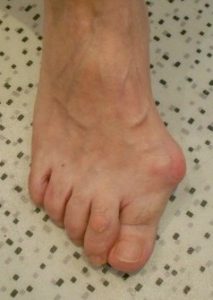 Hallux valgus: great toe deformity deviated towards the other toes

Many reasons can explain the onset of hallux valgus. Nevertheless, two of them are more frequent than the others.

The anatomy of the forefoot is one of the main elements to explain hallux valgus. It may occur when this anatomy changes from usual morphology:

However, “anatomical factors” doesn’t necessarily mean hereditary. The foot anatomy as it is at birth isn’t only the consequence of family genetic transmission (hereditary). The family background of hallux valgus, even numerous, are not an absolute proof of a hereditary disease. Mechanical explanations are also frequent.

The shoes act like an external element imposing a constraint on the big toe. Whatever the design is, they deviate the hallux towards the other toes, especially the “pointed-tip” ones.
The heels are also concerned since the higher they are, the more they bring the foot forward, precisely where the shoe is the tightest.
Other mechanical factors may ease the onset of the deformity but their responsibility is controversial: weight excess and flat foot. In both cases, the explanation would be the increase of mechanical stress on the foot and the first metatarsal.

Women represent the vast majority of patients. This firstly reflects their hormonal impregnation, increasing ligaments laxity. As we have seen, it fosters the hallux valgus onset by allowing an excess of mobility of the entire first ray.
On the other hand, women are culturally more concerned by wearing hight heels and “pointed-tip” shoes. Therefore, with same anatomical constitution as men, they are more prone to develop a hallux valgus.

Two large profiles of patients consult for a hallux valgus :

Consequences on the daily life

The only presence of a big toe deformation isn’t enough to consider it as a pathology. It is all the tough work for the surgeon to recognize when the patient crosses the limits of a normal state. Identifying the daily consequences is therefore mandatory.

Pain is the key symptom of hallux valgus. Pain is located on the big toe especially when using the foot intensively. For instance at the beginning of hallux valgus, long lasting hiking tracks, sports in a standing position or jumping, or simply daily walk when the disease has progressed. Normally, the pain decreases when stopping the effort, but it can occur even at night.
When it is present every day, it engenders overwhelming difficulties for the footwear. Sometimes, it even has consequences on the patient’s social life, for example when renouncing to the simplest activity needing to wear shoes.

The bone protrusion at the medial aspect of the foot is in conflict with the shoe. When the conflict lasts, a red and hot “inflammatory” zone appears. Very painful at the slightest contact it’s called bursitis when filled with liquid. In the most evolved cases, the bursitis tears and a viscous content poors out. The risk of deep infection comes when skin germs take advantage of the opening to colonize the cavity. 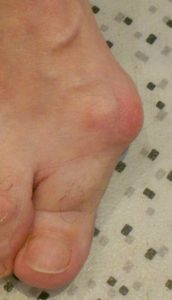 Hallux valgus: bursitis developed where the deformity is maximal